It's been awhile since I posted on the blahg, huh? Things have been a little slow perhaps, but they'll keep on chugging along.

FRHS sends me down some weird rabbit holes sometimes. Part of the problem is that, because the manga is from the early '90s, I suspect the references tend to predate the Internet. Compared to Ueshiba's references, which were actually fairly easy to google up, Ito's are darned obscure. Maybe self-referential too, which I'm not _that_ interested in digging into. Anyway, enjoy this kooky theory about Japanese being related to American Indians and the lost tribes of Israel.

It feels like I've been working on this chapter of Natsunokumo for-evah. It's kind of a nightmare to typeset without sacrificing either legibility or aesthetics; too many little bubbles stuffed with text. But whatever, it's done.

HoneyComb: this should be the easiest so I dunno why I'm slowpoking it the worst. It's much more relaxing to re-read and enjoy Katsura's work, instead of scanlating it. I just got Lady HoneyComb, which is some kind of side-story where the crew is now working at a hotel. She just can't quit this format, can she? And I can't stop reading it.

Here's the final part of the first volume. Just seven more to go...

There were a couple references I didn't get this chapter. Tosaka no Hito? Mirias? Shrug.
Posted by mako at 11:08 PM 3 comments:

Uh, it's been awhile for this series, huh? I had this translated last year but I guess real life caught up to somebodyelse, may he rest in peace.

Anyway, I can't be arsed to redraw this public raw so you're going to have to put up with eyecancer; the story's the important part anyway. This series is words words words though so it's going to be a low priority compared to FRHS.
Posted by mako at 1:31 AM No comments:

It sure took me long enough, but finally here's some new FRHS. I'm hoping to get more procedures in place to make this a more efficient process; otherwise it'll take forever to get through this series, and that's something neither you nor I desire.

A brief word about chapters 1-4. Back in the day, I thought the Jinmen-Juushin dudes were pretty good. They had decent scans and good flow. But then I learned a bit of Japanese — more than what's required to be dangerous but still far from perfect — and read though the J-J releases again while I was prepping for this project. And let me tell you, there are some real stinkers in there, you can compare if you're really curious. (I used the J-J release as a base, and corrected as necessary. I do love some of J-J's localizations, such as "damn kids are always putting graffiti out there!")

Anyway, I come to bury Caesar, not to praise him, so to speak. J-J did the best they could, and they worked on some great series. Average scanlation accuracy has presumably gotten better over the years, but the lesson is to take it all with a grain of salt. If it doesn't make sense while you're reading it, it's not "zany" or "deep", it could well be completely wrong. I know that sometimes I'll be doing a QC pass, think to myself that a bubble doesn't make sense, do a bit more research, and find that I was completely off base. A bubble here and there usually doesn't affect plot comprehension, of course, which is why scanlators get away with cutting corners. That's no way to live, though.
Posted by mako at 2:28 AM 1 comment:

All right, new project time. This series has been on my to-do list since the very beginning: Takehito Ito's Future-Retro Hero Story. It's the precursor to Outlaw Star, and as such might be characterized as a juvenile fantasy, versus an adolescent one. In other words, they both have spell guns and spaceships, but FRHS tends more to slapstick than it does toward violence.

Why do I find FRHS intriguing? Ito has a gift for world-building, for universe-building. As much as I love Star Wars and Star Trek, we need more sci-fi universes, ones that are full of their creator's inspirations and idiosyncrasies. Though Ito borrows a lot of elements from American pulp sci-fi (Edmond Hamilton's Captain Future stories being perhaps the wellspring), there's an original universe here. And the pulpiness, the pulpiness. I love it whenever one culture's innovation is viewed through the lens of another, entirely different culture. (I feel compelled to mention Yuichi Hasegawa's Maps, which is earlier and arguably more pulp than FRHS, with absolutely tremendous scale. I would probably never have discovered it if not for ebookjapan promotions. Anyway, another great series that will never be translated.) That said, FRHS does appear to suffer from pacing issues. It may very well have been meant to be a 20-volume epic, but as it turned out, fortune was not so kind to the project.

FRHS was first serialized in Kadokawa Shoten's Monthly Comic Comp magazine, an outgrowth of their computer gaming mag Comptiq. It seems likely that it was one of the inaugural serializations, starting in 1988, though I haven't been able to find confirmation of whether or not that's true. But in 1992 there was a shakeup at Kadokawa Shoten: Tsuguhiko Kadokawa, apparently passed over for the throne, quit and formed his own company, Media Works, where he was joined by many of the Kadokawa artists and creators. As if that weren't enough, in 1993 Haruki Kadokawa, the big cheese, was arrested and later convicted on drug charges. It would seem that FRHS was caught up in the drama -- the obi on volume 5 proudly proclaims the greenlighting of an OVA, one that never came to fruition.

That fifth and final volume of FRHS published under the Comic Comp imprint covered chapters through early 1991. No further volumes appeared until the entire series was released under Shueisha's Home imprint over the course of 1996. Where were the chapters published in the meantime? Unlike most collected tanks, which give the date and magazine of initial publication, these volumes are strangely silent. Japanese Wikipedia claims that FRHS restarted serialization in Ultra Jump come 1995. This is reasonable given that the Outlaw Star manga appeared in Ultra Jump, but then why would they publish the tanks under the Home imprint? Mysteries, I tell you.

Anyway, as far as I know, there are three editions of FRHS out there: 1) 5 volumes, Comp Comics (Kadokawa), incomplete 2) 8 volumes, Home Comics (Shueisha), complete, 3) 5 volumes, Home Bunko (Shueisha), complete. We'll be working from the latter edition, which is dubbed the "Director's Cut". I thought at first the Director's Cut was distinguished by the little scribbles in the margins -- yes, those are from the author and not from the scanlator -- but it seems to have more to do with the reformatting of 8 volumes into 5: additional intro and outro pages have been added. By the way, these volumes are published without chapter numbers, so the release chapter splitting may be arbitrary and capricious.

This is a joint with You're Welcome Scans. Without them I'd probably end up sitting on stuff a lot longer than necessary. Next up is a quick, stopgap TL check of the old Jinmen-Juushin material, then we're into unexplored territory. Should be a fun ride.
Posted by mako at 2:16 AM 1 comment: 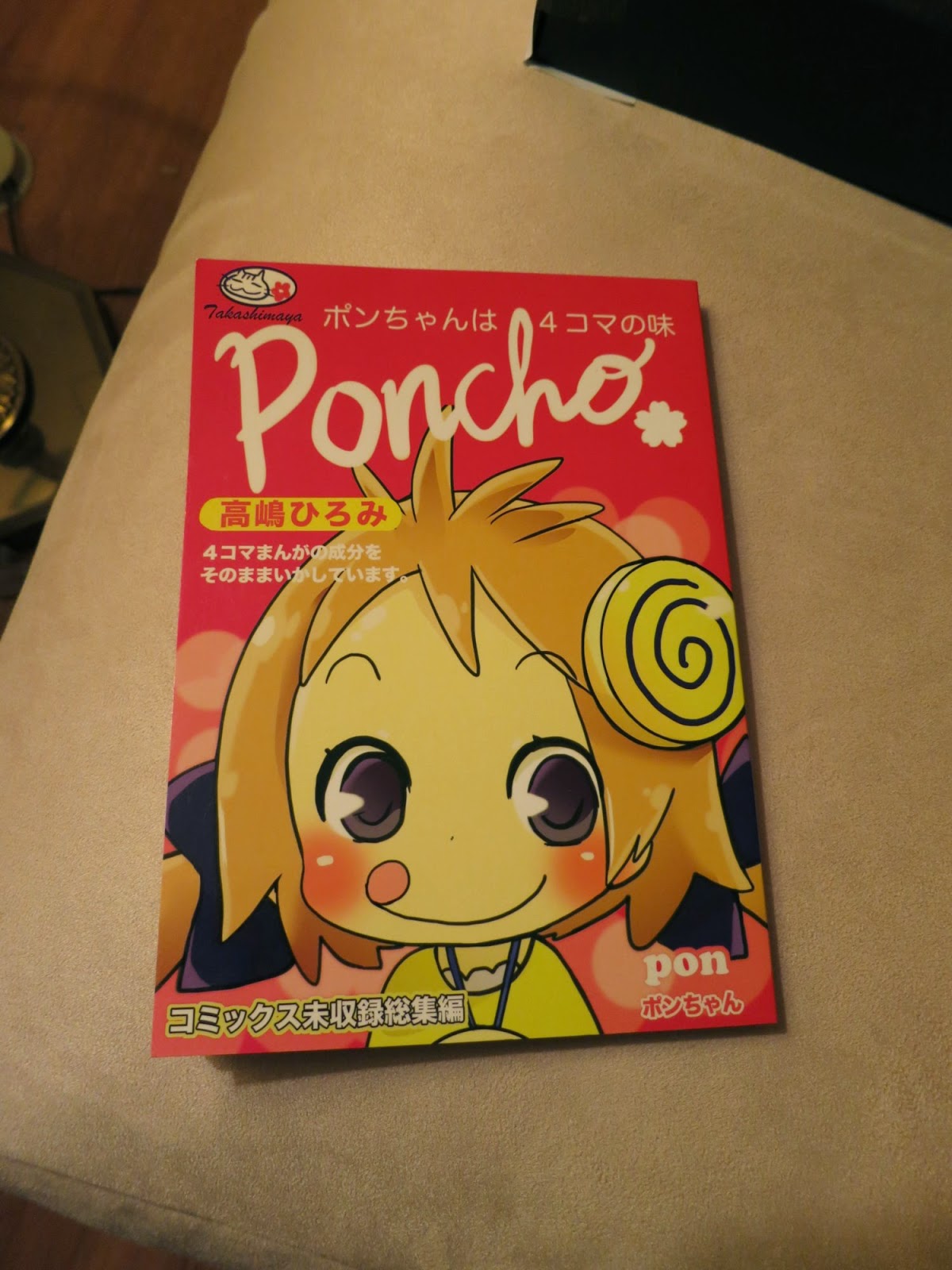 Finally got my grubby mitts on this rare bird. Thanks to the anon who posted a thread all those years ago. That feel when you will never get chocolate from Tomekichi
Posted by mako at 1:21 AM 3 comments:

So I was reading this series (in moon) and I thought it was pretty good, with zany characters and lots of laugh-out-loud moments. And gosh, the Rabbits are dead and no other challengers have appeared, so I guess it's up to me to take up the torch. HoneyComb is made up of nice, bite-sized bits of comedy that should hopefully mean a minimum of time investment on my part. And did I mention that it's funny? And cute? (Well, the last volume kinda goes off the rails but there's plenty of good stuff in the meantime.)

Technical apologetics: I'm releasing higher-res files than I normally do because I can't figure out how to shrink them without moire rearing its ugly head. The public raws are breddy nice though; I'm not bothering to level or clean any further. Probably going to cheap out on redraws, fonts, and other bling too. So deal with it.